15 Most Influential Women of NASA

May 26th is Sally Ride Day, Sally Ride Day honors the first American woman astronaut to go into space. Dr. Ride joined NASA in 1978 and became the first American woman in space in 1983. Ride was the third woman in space overall, after USSR cosmonauts Valentina Tereshkova and Svetlana Savitskaya. In honor of her accomplishment and in recognition of all of the amazing women scientists who have contributed their part to NASA, we have compiled the NASA’s 15 Most Influential Women.

Bios & Photos are credits of NASA unless otherwise noted

Katherine Johnson In 1962, as NASA prepared for the orbital mission of John Glenn, Johnson was called upon to do the work that she would become most known for. The complexity of the orbital flight had required the construction of a worldwide communications network, linking tracking stations around the world to IBM computers in Washington, Cape Canaveral in Florida, and Bermuda. The computers had been programmed with the orbital equations that would control the trajectory of the capsule in Glenn’s Friendship 7 mission from liftoff to splashdown, but the astronauts were wary of putting their lives in the care of the electronic calculating machines, which were prone to hiccups and blackouts. As a part of the preflight checklist, Glenn asked engineers to “get the girl”—Johnson—to run the same numbers through the same equations that had been programmed into the computer, but by hand, on her desktop mechanical calculating machine. “If she says they’re good,’” Katherine Johnson remembers the astronaut saying, “then I’m ready to go.” Glenn’s flight was a success, and marked a turning point in the competition between the United States and the Soviet Union in space.

Dorothy Vaughan In an era when NASA is led by an African American man (Administrator Charles Bolden) and a woman (Deputy Administrator Dava Newman), and when recent NASA Center Directors come from a variety of backgrounds, it's easy to overlook the people who paved the way for the agency's current robust and diverse workforce and leadership. Those who speak of NASA's pioneers rarely mention the name Dorothy Vaughan, but as the head of the National Advisory Committee for Aeronautics’ (NACA’s) segregated West Area Computing Unit from 1949 until 1958, Vaughan was both a respected mathematician and NASA's first African-American manager.

Mary Jackson began her engineering career in an era in which female engineers of any background were a rarity; in the 1950s, she very well may have been the only black female aeronautical engineer in the field. For nearly two decades she enjoyed a productive engineering career, authoring or co-authoring a dozen or so research reports, most focused on the behavior of the boundary layer of air around airplanes. As the years progressed, the promotions slowed, and she became frustrated at her inability to break into management-level grades. In 1979, seeing that the glass ceiling was the rule rather than the exception for the center’s female professionals, she made a final, dramatic career change, leaving engineering and taking a demotion to fill the open position of Langley’s Federal Women’s Program Manager. There, she worked hard to impact the hiring and promotion of the next generation of all of NASA’s female mathematicians, engineers, and scientists. 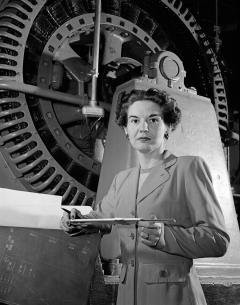 Kitty O'Brien Joyner was an American electrical engineer with the National Advisory Committee for Aeronautics (NACA), and then with the National Aeronautics and Space Administration (NASA) upon its replacement of NACA in 1958. She was the first woman to graduate from the University of Virginia's engineering program in 1939, receiving the Algernon Sydney Sullivan Award upon graduation. When she was hired by NACA the same year, she became the first woman engineer at the organization, eventually rising to the title Branch Head and managing several of its wind tunnels. Her work contributed to research on aeronautics, supersonic flight, airfoils, and aircraft design standards.

Jeanette Scissum joined NASA’s Marshall Space Flight Center in 1964 after earning bachelor's and master's degrees in mathematics from Alabama A&M University. Scissum published a NASA report in 1967, “Survey of Solar Cycle Prediction Models,” which put forward techniques for improved forecasting of the sunspot cycle. In the mid-1970s she worked as a space scientist in the Space Environment Branch of Marshall’s Space Sciences Laboratory and later led activities in Marshall’s Atmospheric, Magnetospheric, and Plasmas in Space project. In 1975, Scissum wrote an article for the National Technical Association, “Equal Employment Opportunity and the Supervisor – A Counselor’s View,” which argued that many discrimination complaints could be avoided “through adequate and meaningful communication.” Scissum later worked at NASA Headquarters as a computer systems analyst responsible for analyzing and directing NASA management information and technical support systems. 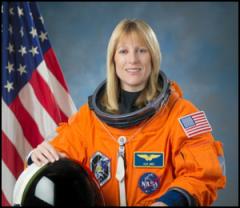 Kathryn Hire joined the NASA team in 1989 where she worked as a space shuttle orbiter mechanical systems engineer, test project engineer, and supervisor of space shuttle orbiter mechanical systems and launch pad access swing arms at Kennedy Space Center. Hire processed space shuttles from landing through ground preparations and launch countdowns for more than 40 missions. Hire flew to space on a second mission aboard Space Shuttle Endeavour for STS-130 in 2010 to help assemble the International Space Station. Hire and her crewmates delivered and outfitted Node 3, also known as the Tranquility module, and the Cupola, a seven-windowed portal for the space station which has been a focal point of the station since installation. As a mission specialist, Hire operated the robotic arms, led the transfer of 4,500 pounds of cargo and helped install water recycling, air cleaning and cooling, and crew exercise equipment in Node 3 and cupola. Between her space flights, Hire supported missions in various roles including Capsule Communicator (CAPCOM) in mission control, Astronaut Support Personnel where she strapped crew members into the space shuttle orbiter for launch, and management astronaut in which she helped develop procedures for commercial spacecraft carrying cargo to the International Space Station. 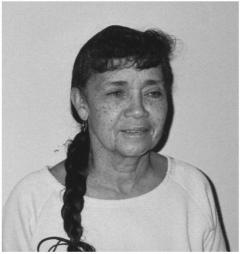 Kathryn Peddrew graduated from college with a degree in Chemistry in 1943. As an African American woman, she faced many challenges while pursuing a career in the sciences during this period. Hired right after graduation, Peddrew was assigned to the West Area Computers at Langley, and began a career at NACA/NASA that spanned forty-three years. Involved in both aeronautical and aerospace research, Peddrew recalled the excitement at Langley when the first astronauts trained there, and the many breakthroughs made during the early space program.

Melba Roy Mouton was Assistant Chief of Research Programs at NASA's Trajectory and Geodynamics Division in the 1960s and headed a group of NASA mathematicians called "computers". Starting as a mathematician, she was ahead mathematician for Echo Satellites 1 and 2, and she worked up to being a Head Computer Programmer and then Program Production Section Chief at Goddard Space Flight Center. Mouton was born in Fairfax, Virginia to Rhodie and Edna Chloe. She graduated from Howard University in 1950 with a master's degree in mathematics. She started working for NASA in 1959, after working for the Army Map Service and the Census Bureau. At NASA, she received an Apollo Achievement Award and an Exceptional Performance Award. She retired in 1973 and passed away in 1990 of a brain tumor. She was 61.

Annie Easley began her career in 1955 as a “human computer,” doing computations for researchers. This involved analyzing problems and doing calculations by hand. When hired, she was one of only four African-American employees at the Lab. When human computers were replaced by machines, Easley evolved along with the technology. She became an adept computer programmer, using languages like the Formula Translating System (Fortran) and the Simple Object Access Protocol (SOAP) to support a number of NASA’s programs. She developed and implemented code used in researching energy-conversion systems, analyzing alternative power technology—including the battery technology that was used for early hybrid vehicles, as well as for the Centaur upper-stage rocket. Easley was very dedicated to her outreach efforts at NASA. She not only participated in in-school tutoring programs but was a very active participant in the speaker’s bureau—telling students about NASA’s work and inspiring especially female and minority students to consider STEM careers.

Nancy Grace Roman was a noted American astronomer who made important contributions to stellar classification and motions, and became the first female executive at NASA, and served as NASA’s first Chief of Astronomy throughout the 1960s and 1970s, establishing her as one of the "visionary founders of the US civilian space program".She created NASA’s space astronomy program and is known to many as the "Mother of Hubble" for her foundational role in planning the Hubble Space Telescope. Throughout her career, Roman was also an active public speaker and educator, and an advocate for women in the sciences. 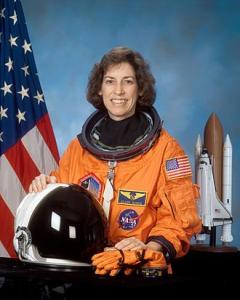 Ellen Ochoa is an American engineer, former astronaut, and former director of the Johnson Space Center. In 1993 Ochoa became the first Hispanic woman to go to space when she served on a nine-day mission aboard the Space Shuttle Discovery. Ochoa became director of the center upon the retirement of the previous director, Michael Coats, on December 31, 2012. She was the first Hispanic director and the second female director of Johnson Space Center.

Margaret Hamilton is an American computer scientist, systems engineer, and business owner. She was director of the Software Engineering Division of the MIT Instrumentation Laboratory, which developed on-board flight software for NASA's Apollo program. Hamilton has published more than 130 papers, proceedings, and reports about sixty projects and six major programs. She is one of the people credited with coining the term "software engineering". On November 22, 2016, Hamilton received the Presidential Medal of Freedom from President Barack Obama for her work leading to the development of on-board flight software for NASA's Apollo Moon missions.

Kalpana Chawla was an American astronaut, engineer, and the first woman of Indian origin to go to space. She first flew on Space Shuttle Columbia in 1997 as a mission specialist and primary robotic arm operator. In 2003, Chawla was one of the seven crew members who died in the Space Shuttle Columbia disaster when the spacecraft disintegrated during its re-entry into the Earth's atmosphere. She is regarded as a national hero in India. 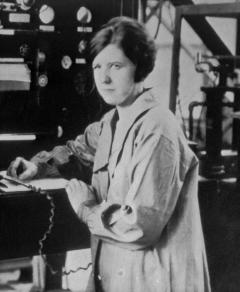 Pearl Young was the first female professional hired by the NACA (which eventually became NASA), in an age when most women in the government were constrained to staffing support positions such as secretaries or administrative aides. After a productive initial career in the field of instrumentation, she recognized the shortcomings of technical writing by the Langley staff and the lack of a systematic approach within the NACA to prepare technical documents. She personally conceived and implemented a highly-successful technical writing system that resulted in outstanding documentation of superior quality. The basic approach inspired by her efforts was implemented by the NACA and NASA, and continues to be used today.

Do you have a little learner who loves space? Check out our 10 Crazy Facts About Space and impress them with your knowledge!  Or keep them further questing to infinity and beyond with our Space Activity Guide!