As children of incarcerated parents we often cope with having to carry a lot of emotional
pain, stigma and trauma. For many, those emotions are especially triggered during Mother’s
Day and Father’s Day. WE GOT US NOW Actionists Alexandria, Shalei and Ebony, each give a
glimpse into the personal struggle that children and young adults have with parents behind bars
during Father's Day.

Shalei’s Story
Growing up, my biological father was incarcerated while my adopted father (my
biological grandfather) served as a very present and involved dad. The kind of involved dad that
made it a big deal when I had a paper cut and would go to the grocery store to buy my favorite
band-aid for said paper cut, dad. This led to me celebrating my adopted father every year, while
simultaneously ignoring my biological father’s existence because acknowledging his absence in
my life left me with more pain than gain. I encourage other children of incarcerated parents to
partner with Alexandria, Ebony, and I to look inward, recognize those feelings, sit in them, move
through them, and use them to not only help others, but help ourselves in the process and
hopefully redefine Father’s Day as a day of resilience and overcoming.

My Father’s Day with my dad (adopted father) probably looked overtly conventional. It
involved BBQ’s, lots of pictures, and celebrating the truly amazing father my dad is. My
grandfather, whom I call my father, sincerely amazes me on the daily with his strength,
kindness, and humbled generosity. Now this conventional Father’s Day was very much my
reality, but only part of it. The thing was that most people only knew half of my reality. They saw
the BBQ’s, the family photos, but they didn’t see the absence of anyone...but, boy did I feel it.
This absence was constantly suppressed throughout the day until I could reach the end of it,
where I’d usually give myself 30 minutes to let my emotions out late at night just in time to shove
them all away for the next day.

My barriers consisted of my own forced lack of emotion, my father’s drug addiction, and
a system that was set up for him to re-enter into as soon as he was released. My biological dad
was in and out of jail my whole life. What could have stopped this? It’s not
complicated...rehabilitation. It is truly that simple for my story. If he had had proper mental
rehabilitation to process the trauma he experienced as a child, as well as drug rehabilitation to
set him on a path away from meth and cocaine, his story and mine might look a little different.
What I can say is now Father’s Day consists of celebrating my two dads, as my biological dad
has been out of jail for about 2 years and has been sober for that time. Is our relationship
easy-going? No, it’s very much still a work in progress. But now I am delighted to have a
seemingly awkward social media post about celebrating BOTH of my dads, who are BOTH my
fathers in every sense of the word.

This guest blog is part of the series: Missing Dad Incarceration and the Difficulty of Father’s Day. We invite you to follow the link to read all of the contributions in the series. 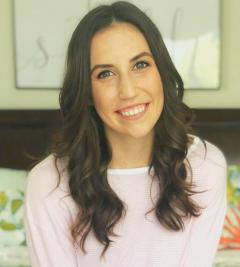 Shalei Heflin is a WE GOT US NOW Actionist, an Arlington, TX native and criminal justice
advocate currently studying for her Masters in Nonprofit Leadership and Management, as well
as a Masters of Scie nce in Criminal Justice. As a previous local titleholder, Miss Sierra Nevada,
in the Miss America Organization, and as a child of incarcerated parents, Shalei has been given
opportunities to share her story nationally, spreading awareness for the population of children of
incarcerated parents. She is passionate about bringing justice, mercy, and love to those who
have been directly impacted by mass incarceration.