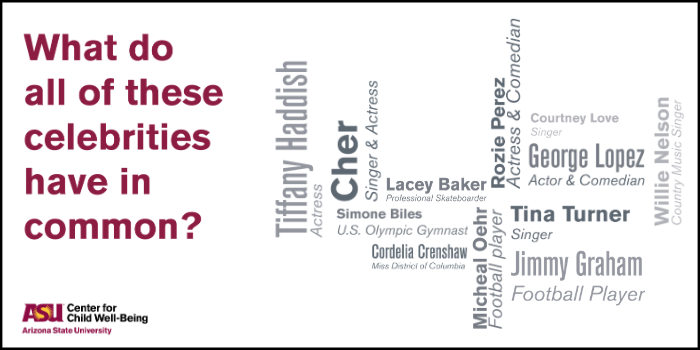 From foster to famous, these celebrities (and many more) got their start as foster kids!
Keep reading below to learn their stories.

Cordelia Cranshaw aged out of foster care when she was 21 and earned her Masters of Social Work at the age of twenty-two. In 2014, Cordelia founded her nonprofit organization, Acts of Random Kindness (ARK), with a mission to help children and their families break the cycle of poverty. This 26-year-old advocates for youth in foster care, is a motivational speaker and enjoys spending time with her seven nieces and nephews. Cordelia uses her platform to inspire others to never let their negative circumstances determine their future success.

At age five, Simone entered the foster care system in Ohio, with her other siblings.  She has previously stated that her mother struggled with substance abuse issues.  Her maternal grandparents, upon hearing their grandkids were in foster care, adopted and raised them.

As a result of a car accident that left her mother mentally incapacitated, Tiffany entered foster care at the age of 12.  She has stated in interviews that she and her siblings were separated, and for a while she lived in group homes.  Tiffany and her siblings were reunited when she was 15, and they spent their remaining young adult years with her maternal grandmother.

Cher was placed in an orphanage at the age of 2, when her mother became ill and unable to care for her.  When Cher was eight, she and her mother reunited and lived with her maternal grandmother in a small apartment they all shared.  Today, Cher devotes much of her time to kids as the National Chairperson of the Children’s Craniofacial Association. Her involvement began after she starred in the movie Mask” as the mother of a child with a craniofacial condition. Now she is dedicated to doing everything possible to “spread the word”, and invites CCA kids backstage at her concerts.

Lacey (Leo) Baker credits her love of skateboarding to her foster brothers, whom she would watch skate on the makeshift half pipe they built in their backyard.  At age 14, Lacey became the youngest X-Games medalists, winning the bronze that year.  She has gone on to become one of the best female skateboarders in the world.

At nine years old, Jimmy was dropped off at social services, where he lived in group homes until he was 14.  It was at that time a church counselor welcomed him into their home, and encouraged his love of sports.  He earned a basketball scholarship to the University of Miami where he played through his undergraduate years.  He wanted to attend graduate school and stayed on at Miami, playing tight end on the football team.  After one year he was drafted by the New Orleans Saints.  He has gone on to play for the Saints, the Seahawks, the Packers, and most recently signed with the Bears.

Marilyn Monroe is touted as an American Icon, and one of the most well-known celebrity actresses in the world.  Marilyn was born to a single mother, who eventually would be declared legally insane, and admitted to an asylum.  At that time, Marilyn would become a ward of the state living in an orphanage. Eventually, she would leave the orphanage, and live with a family friend before setting off for Hollywood.

At three years old, Rosie Perez's mother, who grappled with mental illness, placed her and her siblings in a group hope. She spent 10 years in state care, before moving in with her aunt. She credits her aunt, her father, and supportive counselors for believing in her and helping her succeed.  Now Rosie uses her celebrity as a platform to advocate for foster youth and to compel states to make foster care safer, move kids between placements less often, and put fewer children in institutions and more in family-like settings

Do you know other celebrities who have experienced foster care? Share with us on twitter! We'd love to keep the conversation going!  May is National Foster Care Awareness Month.  Please check back frequently to learn about us, our partners, and how we are advocating for foster youth in Arizona and nationwide!