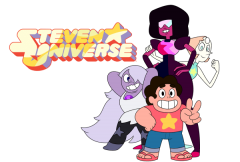 From the show description: The Crystal Gems are a team of magical beings who are the self-appointed guardians of the universe. Half-human, half-Gem hero Steven is the "little brother" of the group. The goofball is learning to save the world using the magical powers that come from his bellybutton and he goes on magical adventures with the rest of the Crystal Gems, even though he's not as powerful -- or smart -- as fellow group members Garnet, Amethyst and Pearl. Despite his shortcomings, Steven usually finds a surprising way to save the day.

Pride Magazine has been vocal in their support of Steven Universe, celebrating the show’s tackling of topics like black beauty, non-nuclear families, queer love, body image, sisterhood, imperfect parents, disciplinary differences between cultures, and the unfair expectations of society on being yourself and growing up.

While the show was cancelled in 2019, all episodes are available on Cartoon Network, linked above.

From the show description:
The series focuses on the daily life of Clarence Wendle, a fun-loving and spirited 10-year-old boy, and his best friends: Jeff, who is the more intellectual type, and Sumo, who often uses drastic measures when solving problems.

Clarence lives with his divorced mother Mary and her boyfriend Chad in the fictional town of Aberdale, Arizona, located near Phoenix. Each episode focuses on the daily-life situations and problems that Clarence and his friends encounter, and their everyday adventures and life experiences as kids. Clarence’s friend Jeff has two moms, who frequently join the trio on their adventures.

Other characters include students and faculty at Aberdale Elementary, Clarence's school. Certain episodes focus on the life of supporting characters, like the citizens of Aberdale and Clarence's classmates.

The series was cancelled in 2018, but episodes can be streamed from the Cartoon Network (linked above).

From the show description:
Things are crowded in the Loud household, with 11 children -- 10 girls and one boy -- causing craziness in the house. As the only boy, 11-year-old Lincoln is in the middle of all of the chaos. Whether his sisters are giving him unwanted makeovers or he's racing them to the couch to gain control of the TV, Lincoln is often getting involved in antics with his siblings. Lincoln's best friend Clyde, who happens to be an only child with two Dads, is jealous of Lincoln's large family and is always willing to play his part in the schemes.

Star vs the Forces of Evil (7+)
Disney

From the show description: When magical princess Star Butterfly receives a royal magic wand for her 14th birthday, she proves to her parents that she is not ready for the responsibility that comes with it. As a result, they send her to a place that doesn't have magic -- Earth -- in hopes that she will gain maturity. Upon her arrival, Star is given a family to help guide her, so she moves in with the Diaz family, which includes teenage son Marco. Star takes Marco with her as she battles villains -- both in their high school and throughout the universe -- as she attempts to protect her powerful wand.

Pride Magazine loves Star vs the Forces of Evil because it “treats LGBT characters like they’re no big deal. Girls confess crushes on girls like it’s no different than boys, same-sex couples kiss in the background at school dances, and while main character Marco Diaz is a cishet dude as far as anyone knows, he certainly has no issues challenging the stereotypical boy’s role, loving cooking and happily dressing up as a princess when needed on their many magical girl adventures.”

The series came to an end in 2019, but can be streamed on DisneyNow.

From the show description: Sir Cedric shares the story of how he transformed from a pumpkin farmer into a full-fledged knight with his adopted 10-year-old daughter, Nia, who is training to become a brave knight herself.

Recipient of the GLAAD Media Award for Outstanding Kids & Family Programming, The Bravest Knight showcases same sex parenting “in an authentic and loving way. Focusing on the love Nia’s two dads have for her as parents.”

The show is in its first season, on Hulu. 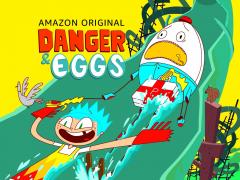 From the show description: D.D. Danger and her best friend, a giant, talking egg, are always chasing the next big thrill. They are challenged to conquer the world's weirdest water slide, and, once inside, they meet someone who has not seen people, or eggs, for a long time.

Danger & Eggs has risen to national acclaim from The Daytime Emmy Awards, GLAAD Media Award for Outstanding Kid and Family Programming, and won the Gold Award from the Parents Choice Foundation.   Critics love the show because it “can showcase dogs that predict the future in one episode, and in another episode, focusses on the power of a secret. Along the way, Milo, identifies as non-binary and uses they/them as preferred pronouns and recently “out” Zadie sings a song about her first day at school as her real and authentic self, later explaining to Phillip the concept of “chosen families” (i.e. a group of people to whom you are emotionally close and consider family, even if you are not biologically related). This 21st century buddy show offers a reassuring message to all kids about finding, and taking pride in, one’s own identity, whatever it happens to be.”

From the show’s description: Life goes from routine to a roller-coaster ride overnight for artistic teenager Andi Mack. It all happens on the eve of her 13th birthday when free-spirited older sister Bex -- who has been traveling around the world -- returns home to make a revelation, which changes everything for the Mack family. It turns out that Bex isn't Andi's sister -- she is her mother -- and Celia, who Andi thought was her mom, is actually her grandmother. Learning this family secret sends Andi on an uncharted course of self-discovery. She's not alone on her journey, as best friends Cyrus and Buffy are also trying to figure out their places in the world.

The comedy-drama won GLAAD’s inaugural media award for outstanding kids and family programming last year for having a story line that focused on Andi’s friend Cyrus coming out.

The show was cancelled after three seasons, but can be viewed on Disney Plus.

For more great resources on celebrating and educating your children about Pride Month visit our Pinterest board. Follow this link to read all of the stories featured in our Pride Month series.