Strong Threads
by Irene Burnton,
Professor of Practice
ASU School of Social Work
and the Center for Child Well-Being

Each day we weave our life experiences into a tapestry.  The intricate interplay of contrast results in a masterpiece or a mess – often both.   Strong threads bind the art whereas others that may appear flimsy add creativity and innovation.  How we weave life’s contrasts makes one tapestry a work of art and another a bland fabric.

Students just graduated from college during a time of unprecedented difficulties caused by Covid 19.  I asked them what led them to not only start their college journey but complete their degree. Most identified the support of family or a special friend.  Several are the first in their family to achieve a college degree.  Kayla Taylor overcame overwhelming circumstances.

May is foster care awareness month.  Over 70% of foster youth dream of going to college, yet only 20% enroll.  Estimates regarding graduation with a four-year degree range from one to 11% (Johnson, 2019).  The threads that run through the life of a foster youth who successfully graduates from college are enormously strong.

Kayla was adopted by her foster mother a month before her 18th birthday.  Although stubborn is often viewed as an undesirable trait, she believes it is the thread that allowed her to persevere from living in a crack house behind a Walmart in rural Arizona to obtaining her bachelor’s degree in social work in the midst of a pandemic. 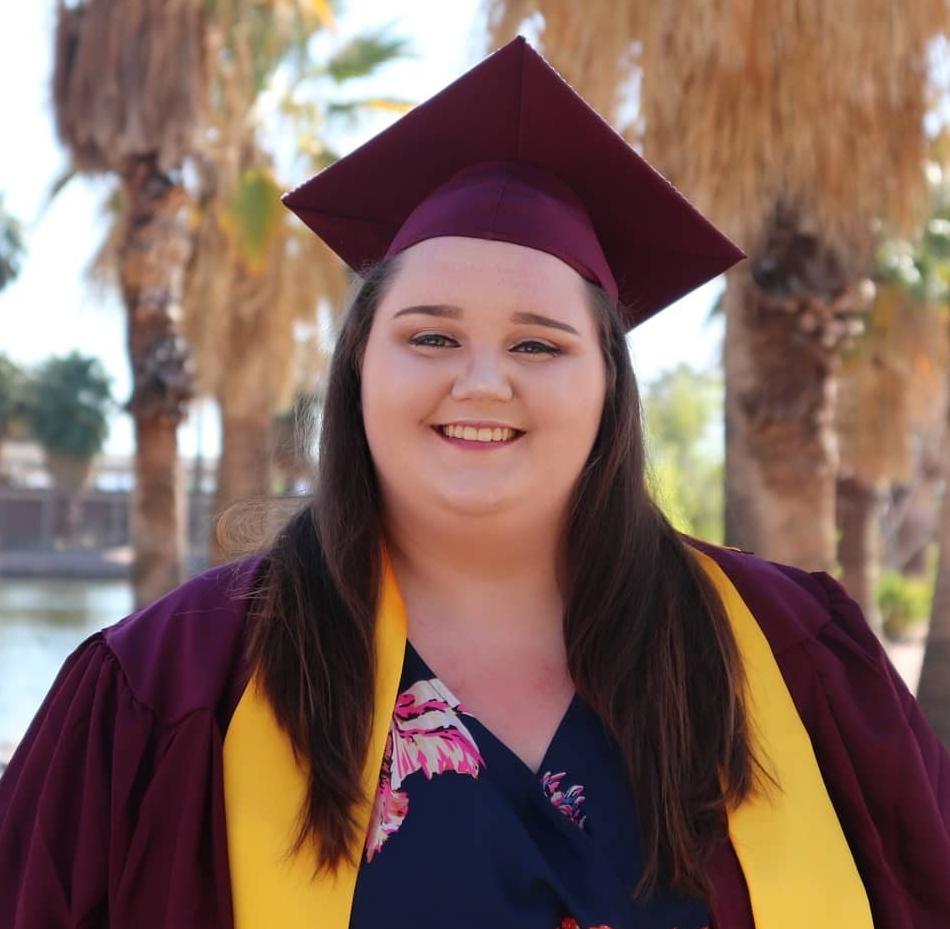 Kayla’s teen years were spent moving from motel-to motel, panhandling for gas money, stealing food from dollar stores and crisscrossing the country.  Kayla and her biological mother trudged from Arizona to Florida where her brother, ten years her junior, was born.  Soon thereafter they followed her birth mother’s meth-addicted boyfriend back to Arizona with the new baby in tow.

When she should have been in school texting friends and studying for exams, Kayla, her brother, and birth mother were living in a car driving aimlessly from place-to-place.  Her mother’s meth addiction over a prolonged time impacted her brain and her behavior became increasingly erratic mimicking schizophrenia.  In one incident, Kayla was holding her one-year-old brother on her lap because they had no car seat.  Her mother “spaced out” and stopped in the middle of a 4-way intersection where they could have been T-boned by another car.

Police officers, case workers, and chaos made up the fibers of Kayla’s daily environment bouncing back and forth between her biological and foster mother.  Several times she and her foster mother discovered that her baby brother was missing.  This prompted a police report and subsequently he was found with his birth mother in a crack house.  Kayla grew more fearful as her mother’s addiction left her with little connection to reality.  After 15 years of it being “just the two of them,” her mother became a stranger.  Eleven months after a traumatic incident on her 17th birthday Kayla was adopted by her foster mother.

Kayla attended school sporadically, making it difficult to cultivate friendships and leaving her feeling isolated.  When she was at her foster home the oppressive fear was absent, and she concentrated on her studies.  School was an escape and became a channel for inspiration.  Her grades improved.  A high school counselor noticed and supported Kayla’s dream to attend college.  She was accepted at ASU.

ASU’s Bridging Success Early Start program provides trauma informed support and coaching for students who have been involved with the child welfare system. Coordinator Justine Cheung, helped Kayla learn about financial aid and the power of someone who cares.  She met other foster youth and for the first time in her life, Kayla found a place where she felt like she belonged.

Kayla started classes in nursing but did not like “guts or chemistry.”  Justine suggested social work.  Kayla had interactions with social workers many times, but never imagined she could be one too.  She has found that she is “actually quite good at this.” (K. Taylor, zoom interview, May 13, 2020)

Kayla said what motivated her through the difficult and sometimes isolating four years in college was fear of ending up like her birth mother and having to pay back college loans.  But it is also her intrinsic characteristics coupled with supportive relationships.

Research tells us that foster youth who are successful in college have a strong sense of autonomy (a fancy word for stubbornness) and an internal drive to achieve (Johnson, 2019).  Kayla is blessed with a keen mind.  She has a belief in herself and her ability to do what she sets out to do despite life’s challenges.  She remains open to opportunities even if they come from unexpected places.

From the time she was a little girl, Kayla’s birth mother encouraged her to get a college degree.  Among the “burnt-out” professionals she encountered was a high school counselor and college advisor who saw Kayla’s potential and provided support and direction.  Kayla believes she is one of the ‘lucky ones’ because she had a consistent foster mother.

Kayla plans to use her degree to assist youth.  She understands the deep pain of children in the foster care system.  She encourages foster youth to “not listen to negative people who try to push you down – or make you feel stupid or useless – know yourself and if you think you can, you can.  Trust yourself and your gut feelings.”  She adds, “no matter what, you are worth it – and your dreams, no matter how out of reach they may seem, are achievable.”  (K. Taylor, zoom interview, May 13, 2020)

As each of us weaves the tapestry of our lives – navigating through and around a worldwide pandemic - we can all use Kayla’s advice and those strong, stubborn threads that made her tapestry a work of art.